In terms of application, roots blower is mostly used as air blower, which is widely used in many fields such as building materials, electricity, smelting, chemical and petrochemical industry, mining, port, textile, post and telecommunications, food, paper making, aquaculture and sewage treatment. The roots blower is usually used as a source machine for various low pressure pneumatic conveying systems.

The basic structure of roots blower

Main parts of the blower include shell, wall board, rotor, synchronous gear, bearing and seal.

The casing is an oval section cylinder body, which is generally made of high strength cast iron. The cylinder body is provided with inlet and exhaust orifices, and the external cast reinforcing bars and mounting feet are mostly integral structures. There are also some large - sized machine case with horizontal split structure, the upper and lower shell between pin positioning.

There is a wall board between the housing and the main and auxiliary fuel tanks. The first function is to act as the end cover and seal both ends of the housing. The other is to support both ends of the rotor. The one near the end of the shaft is called the front wall, and the one at the other end is called the back wall. Some wall panels are equipped with side plates, and the side plates are embedded into the shell ports during assembly, which can meet the requirements of radial positioning of rotor. Even if there is wear and tear at work, only the side board needs to be replaced, and the whole wall board will not be scrapped. Wall panels are generally made of high strength cast iron. When transporting corrosive gases, it is usually made of stainless steel, just like the case.

The rotor has two leaves and three leaves according to the number of impeller, and straight leaves and twisted blades according to the shape of impeller. Both rotor blades are straight, and the three-blade rotor has straight blade and twisted blade. In terms of acoustic performance, three leaves are better than two, and twisted leaves are better than straight ones. However, due to the limitation of processing conditions, the rotor of straight blade is more used in practice. 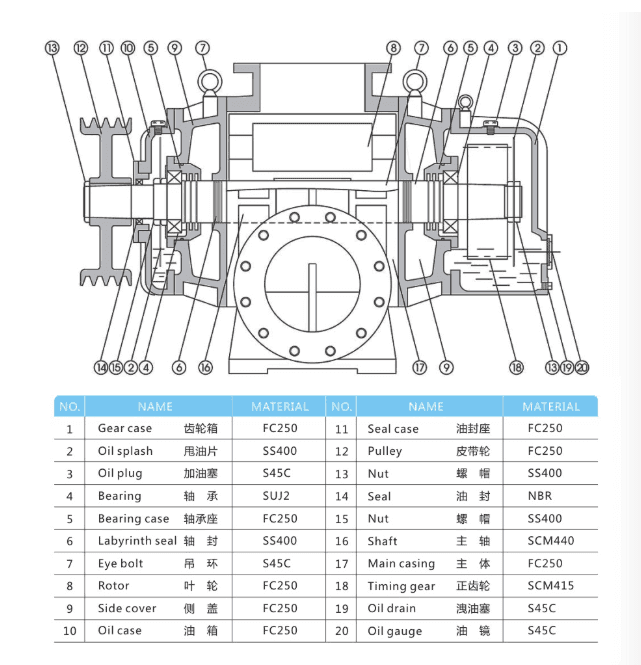 The function of synchronous gear is to transfer power and to determine the gap between two impeller to ensure the synchronous operation of two rotors. The main and driven gears have the same meshing parameters and are a pair of cylindrical gears whose transmission ratio is equal to 1:1. In order to facilitate circumferential adjustment, driven gear is mostly composed of gear ring and hub. When adjusting, the rotation shall be carried out according to the specified rotation direction. When rotating in the reverse direction, the gear side gap will be empty to the other side of the tooth groove, and the gap between the main and driven impeller will change accordingly.

The gear has straight teeth, oblique teeth and herringbone teeth, etc., the material is usually high quality carbon steel or high strength alloy steel. Cylindrical or taper fit between gear and shaft, gear ring and wheel bearing. When a cylinder is used for matching, a flat bond is arranged between the mating surfaces.

The main purpose of sealing is to prevent gas and oil leakage. Seal quality, to a certain extent, can reflect the level of product design and manufacture and performance of the pros and cons. Especially when conveying inflammable, explosive or poisonous gas, sealing is the key factor of safe operation of the blower.

Seals fall into two categories. One type is the seal of fixed position, such as the seal between the wall board and the housing, between the wall board and the oil tank, and between the bearing gland and the bearing seat. The other type is the seal of the moving part, such as the seal of the end of the shaft, the tail of the bearing seat and the extension of the shaft, which is called the dynamic seal (or shaft seal). Static seal structure is simple, generally rubber asbestos board, o-ring, and so on. Shaft seal structure is more complex, commonly used labyrinth seal, skeleton oil seal group, ring seal, packing seal and mechanical seal.


Please feel free to give your inquiry in the form below. We will reply you in 24 hours.